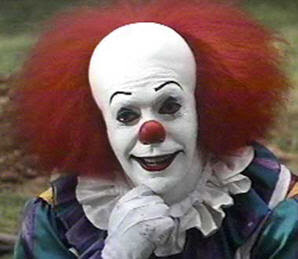 It (also referred to as Stephen King's IT) is a 1990 horror/fantasy mystery miniseries based on Stephen King's novel of the same name. The story revolves around an inter-dimensional predatory life-form, which has the ability to transform itself into its prey's worst fears allowing it to exploit the phobias of its victims. It mostly takes the form of a sadistic, wisecracking clown called "Pennywise the Dancing Clown". The main protagonists are "The Losers Club" a group of social outcasts who discover Pennywise and vow to destroy him by any means necessary. The series takes place over two different time periods, the first when the Losers first discover Pennywise as children, and the second when they're called back as adults to defeat Pennywise, who has resurfaced.

In the town of Derry, Maine, six-year old Georgie Denbrough is lured to a storm drain when his paper boat drops down into it. He encounters a seemingly friendly clown named Robert Gray who calls himself "Pennywise the Dancing Clown." Pennywise tempts Georgie closer with promises of candy and balloons, exclaiming that they all float down into the sewer. He says that Georgie can float too before revealing his true nature, grabbing him and viciously tearing his right arm off. His older brother Bill is overwhelmed with guilt for inadvertently sending Georgie to his death and is terrorized when his picture comes to life, giving him a stutter from the trauma.

He befriends several similar "misfits." One is Ben Hanscom, a loyal, determined, overweight and ingenious builder from a home broken after the death of his military father. He is terrorized by visions of his father trying to goad him into the sewer plant. Another is Eddie Kaspbrack, a hypochondriac, asthmatic boy who is frail and shy. Kaspbrack is taunted and harassed by Pennywise (who shows a strong dislike towards him for being "girly"), while attempting to shower at school.

The group later includes Beverly Marsh, a tomboy with an abusive father and a dead eye with a slingshot. She believes Bill's stories when her bathroom is destroyed by a geyser of blood (courtesy of Pennywise) that he helps clean up before her father gets home. Richie Tozier is a comedic red head who isn't afraid to stand up to the school bully, Henry Bowers, and his friends. He is a movie buff, which prompts Pennywise to attack him as the Wolfman. Stan Uris, a Jewish boy scout and bird watcher, who is the next to see It in that summer when he is trapped by a mummy in an abandoned house. Mike Hanlon, an African American student facing a difficult time as a new student and resident of Derry, often finds himself in the crosshairs of the racist Henry Bowers as well. Mike is last to see It when his photography book comes to life showing him and the others Pennywise's history as he threatens the group.

As each of them face their greatest fears (as well as Henry Bowers's harassment), they vow to avenge the deaths of George and every other child killed by "It." They travel into the sewers followed by Henry, Belch Huggins and Patrick Hockstetter as payback for a rockfight a month ago. The losers enter in the main sewer hall and discover Stan is missing, as he had been pulled by Henry and Belch. Henry orders Patrick to create an ambush on the remaining Losers but is killed by It. Meanwhile, just when Henry is about to kill Stan, Pennywise in the form of the Deadlights, bursts through a sewage pipe and both Stan and Henry watch in horror as Pennywise drags Belch through the pipe and eats him alive. When Pennywise comes out of the pipe, Stan escapes while Henry stares at Pennywise and his hair turns white. Pennywise spares Henry's life and continues searching for Stan.

Stan reunites with the others and tells them the "deadlights" are far worse than Pennywise, and the losers decide not to stare into the lights. Pennywise catches the Losers and grabs Stan. Just as Pennywise is about to eat Stan, Eddie wounds Pennywise by spraying him with his inhaler which is filled with battery acid and Beverly cracks open the monster's head with her slingshot, revealing the deadlights. Pennywise does somersaults in the air and vanishes into the ground. Before he is completely gone, Bill pulls Pennywise's glove and the glove slips off It's hand revealing a three-fingered claw and then It disappears in the drain. With their job done, the seven vow to return some day if ever It returns. Meanwhile, Henry escapes the sewers is arrested and sentenced to life in an asylum for confessing to the counts of murder of all the children and his gang of friends.

Mike had become the only member of the Losers Club to remain in Derry after the events of the 1960s. His memory of the events are still completely intact, and when he hears of the mysterious, unexplained death of a little girl (shown in the film's prologue), he begins to suspect It has returned. He calls up each of his friends, who have all become successful in their own right. Bill has become a horror novel writer married to a beautiful actress named Audra; Ben has become a famous architect as he'd always wanted; Beverly has become a fashion designer; and Richie has become a late night TV comedian. Eddie owns a successful limousine service and Stan has become a real estate broker. Having moved on into comfortable lives and having barely a glimmer of the memories of that summer, they are all traumatized by the memories awakened by Mike's phone calls. While they agreed to return as promised, Stan is unable to cope with the fear and kills himself.

Upon the return to Derry, their reunion is lighthearted until terrifying events unfold that test their resolve. Beverly encounters a kindly old woman in her old home who tells her that her father is gone, but the woman is more than she appears. Ben sees the skeleton of his father, which is still trying to get him to return to the sewers; later, the group's reunion dinner comes to life and tries to attack them. Pennywise, unable to kill them because his influence over them as adults is limited, sends Henry to do the job. Bowers manages to attack Mike and wound him, which forces Bill and others to consider another direct confrontation with the clown. Eddie and Ben manages to kill Bowers in a struggle.

With Henry dead, It is prompted with the task on killing the Losers on its own. Meanwhile, Audra follows Bill to Derry but falls under the influence of It's "Dead Lights" and is made catatonic by him. As the five remaining "Losers" find their way to It's cave they are confronted by his true form; a massive, hideous spider-like creature that mortally wounds Eddie when he steps forward to save Ben and Bill's lives. Once again, Beverly is able to use her slingshot on the creature; this time the strike rings true and mortally wounds It. In their rage, Ben, Ritchie, Bill and Beverly slaughter and dismember It. Afterwards, they return to Eddie, who dies in their arms. They are able to leave, taking Eddie's body and the catatonic Audra with them. They later bury Eddie in the Derry Cemetery.

In the aftermath, Mike marks his own fading memories of the past as a sign that It was truly destroyed that time, and the adult Losers Club can return to their lives as the memory of the traumatic events fades entirely, Richie gets a part in a movie and he partners up with a man that's exactly like Eddie, Beverly and Ben solidify their childhood crushes, get together, get married and expect a child on the way. Audra, still catatonic from her encounter, is coaxed back to life aboard Bill's old bicycle "Silver" when he takes her to outrun It's fading influence the same way he did when the bike helped Bill while trying to save a young Stan who was frozen with fear. All as it was, they realize that they can now move on with their lives. As they leave Derry behind, Pennywise's evil laugh is heard one last time.


Differences between the novel and the film

Stephen King's It received generally mixed to positive reviews from critics and television viewers. Tim Curry's performance as "Pennywise" has received universal critical acclaim and praise for capturing the novel's interpretation of the character. The film currently has a 64% fresh rating on Rotten Tomatoes.[3]

The film was released on VHS in early 1991 after the film's initial broadcast. The original VHS release had two separate tapes, one with Part 1 and the other with Part 2. A later VHS release (circa 1997-1998) contains the entire film on one tape. All VHS releases of the film are out of print.

The film was released on DVD in 1999 on a double-sided disc with Part One on the front and Part Two on the back. The "To be continued..." and the 1st set of closing credits at the end of Part One and the 2nd set of opening credits at the beginning of Part Two (unlike the VHS release) were removed. The DVD version of It also features an audio commentary by the director and cast members. The film's aspect ratio has been cropped to give it a 16:9 widescreen aspect ratio.

On March 12, 2009, Warner Bros. announced that a new adaptation of Stephen King's novel had started. Dan Lin, Roy Lee and Doug Davison are set to produce. The screenplay is currently re-written by Dave Kajganich.

On September 21, 2010, film director Guillermo Del Toro announced that he would like to direct new adaptations of the Stephen King novels It and Pet Sematary but stated that he is very busy with a number of other projects and he would be unable to make them any time soon.

On June 7, 2012, The Hollywood Reporter announced that the novel would be adapted into a two-part film, directed by Cary Fukunaga with Chase Palmer as screenwriter; Jon Silk, David Katzenberg and Seth Grahame-Smith as producers and John Powers Middleton as executive producer.